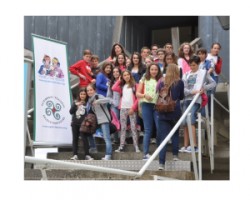 The xix World Congress of Educators will be developed from the 11th to the 13th April in the University of Campinas – UNICAMP, in Brazil. On this event, between 600 and 800 educators from Brazil and from the entire world will participate, under the slogan: I AM BECAUSE WE ARE.

Ponte… nas ondas! will present its experience of the “Mesa dos Povos” of the Lusophony with other project from different countries. Santiago Veloso, coordinator of the Association in Galicia and Portugal, will intervene on one of the tables of the day 11th with the sociologist and teacher of the University Agostinho Neto of Angola, Laurindo Vieira and the teacher Débora Mazza, from the Department of Ciências Sociais na Educação from the UNICAMP of Brazil.

In addition, the materials edited by the association during these two decades of activities will be exposed on the Congress: the disc “Meninos Cantores”, the book-disc “Cores do Atlántico” (published also in Brazil by the editorial Latus from the University of Paraiba) and the book-cd-dvd “Na ponte”. These publications attracted the attention of the organization of the Congress that recognized the activities developed by Ponte…nas ondas! an excellent pedagogical intercultural practice that deserves to be disclose to educators of all the world.

“I AM BECAUSE WE ARE”

The issue chose for the reflection and for the debate is the social context where the education practices are developed with a direct approach to the role of social educators, reflecting about the fields of investigations and the practices focused for the construction of a more fair and equal society. Let’s place us on a context where we are globally conducted for a critical reflection. This reflection looks for going in depth about the ethical, theoretical and methodological foundations of an activity that need to redefine itself, according to the transition that go through the contemporaneity. So, for the people that are not include on the domineering economical system, this Congress is an opportunity of gathering some of the most renowned thinkers of social education, popular education and not formal education with agents of the habitual process of social transformation that build strategies of survival and resistance.

In addition to the debate tables, the exhibitions of works, the expositions of projects, the shops and the fair of caring economy, the cultural diversity of Brazil will have an important presence on the xix World Congress of Social Educators that will start on April 10th on the Centro de Convenções of the UNICAMP in Campinas.

GOOD PRACTICES WITH THE HERITAGE

On the setting of the Congress, Ponte…nas ondas! will show the different actions that integrate the heritage on the process of learning, both on a formal field and on social contexts opened to the community.

Thereby, the work of the Galician-Portuguese intangible heritage on the field of education centres of Galicia and North of Portugal will be one of the actions that will be disclosed, as well as the Collection Contest, the Exhibition of Orality or the diffusion of the role of the Human Living Treasures. The transmission of this heritage to new generations through new digital media in Internet is other of the lines of work that educators will know on the Congress.

THE UNESCO APPROVES THE EXPERIENCE OF PONTE…NAS ONDAS!

The association Ponte…nas ondas!, recently accredited as a consultant ONG of intangible heritage by the UNESCO, has just participate at the last session of the 11th of the Intergovernmental Committee for the Safeguarding of the Intangible Cultural Heritage celebrated in Addis Ababa. The anthropologists X.M.González Reboredo and Álvaro Campelo participated on debate sessions with the others consultant ONG of the entire world, presenting the experience of Ponte…nas ondas! on the University of Addis Ababa too.

On one of the sessions of the Committee, on the table “Learning with intangible cultural heritage in education”, the important role that the intangible heritage has as a potent educational way to contribute to the progress of the education quality was highlighted. 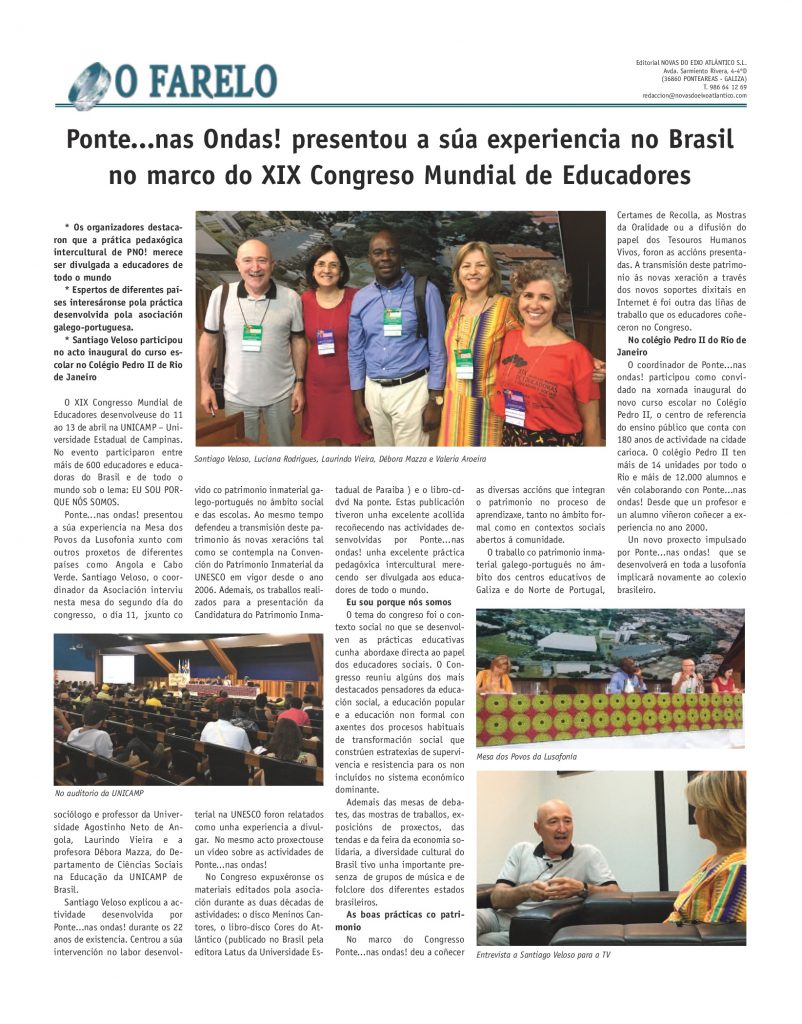 Minister of Education of Spain recognizes the work of Ponte…nas ondas!