Throughout more than two decades, the Association has incorporated its activities into the world of culture in order to integrate it into the work of the students and to put it in dialogue with the experience of communication.

From the hands of the students themselves, people involved with music or literature were integrated into and participated in the programming.

Galician, Portuguese, Brazilian and other Lusophone artists and writers collaborated in the different editions of the communicative experience of PONTE…NAS ONDAS! Musicians such as Uxía, João Afonso, Dulce Pontes, Filipa Pais, Milladoiro, Chico César and Daniela Mercury, writers such as José Saramago and Agustín Fernández Paz, or people such as Federico Mayor Zaragoza, who was the director general of UNESCO from 1987 to 1999, are some of the names that have passed through the programming of PONTE…NAS ONDAS!

Galician, Portuguese, Brazilian, Mozambican and Angolan musical groups have carried out special recordings promoted by PONTE…NAS ONDAS! Among other examples, the bagpipe players Treixadura and the Lisbon Bagpipe Players made a recording and a videoclip together with the traditional theme shared by Galicia and Portugal as a reinforcing activity to the Candidacy of Galician-Portuguese Intangible Cultural Heritage.

The collaboration of important radio journalists was also an important stimulus and reinforcement for the experience. In 1998 and 1999 the journalist Julia Otero broadcast live from Onda Cero in Barcelona with the radio conference and made it known in the rest of Spain. In 2000 it was the prestigious journalist Iñaki Gabilondo who established several connections from the SER chain in Madrid on his program “Hoy por hoy [Today by today]”. Also in that same year Diamantino José did the same thing from RDP-Antena 1 in Lisbon.

In the scope of cultural heritage, Galician and Portuguese anthropologists lend their expertise to the association and collaborate with research and documentation, as well as forming part of the team that carried out the elaborative works of the dossier for the Candidacy of Galician-Portuguese Intangible Cultural Heritage.

From the point of view of innovation and pedagogical renovation, the activity of the association has had the support of educators and pedagogues who have highlighted the uniqueness of the experience by bringing together into its unique formula education, cultural heritage, TICs and communicative media. 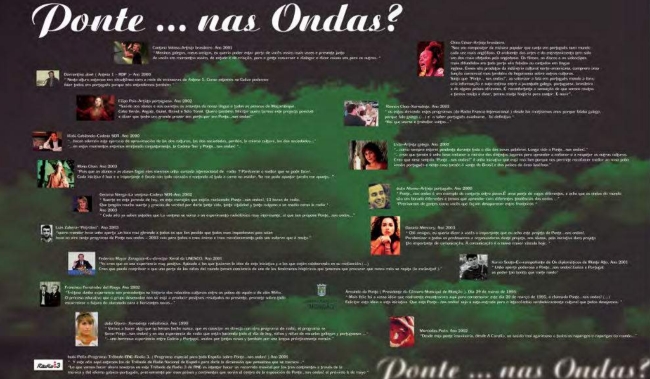