In the most recent editions of this conference, always preceded by intense footwork in the classroom, the theme has focused on various parts of Galician-Portuguese Intangible Cultural Heritage. Intangible cultural heritage has had, since the first proclamation of the Master Works of Intangible Cultural Heritage in 2001 by UNESCO, special disclosure in educational centers participating in the communication conference. 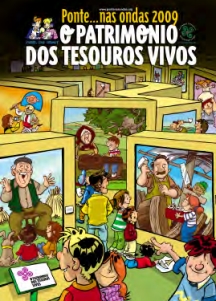 Via the work unfolded for the preparation of the programs, as well as in its broadcast, students have been discovering the common cultural heritage between the two territories, the evidence having been laid out in the contents of many audiovisual programs through the direct participation of many boys and girls on both sides of the Miño River. It was also carried out in practice in live programs where children on the other side of the border were asked to call in live to complete riddles, refrains, etc. or to look for similar ones in their own language.

All this experience with cultural heritage in its moment opened new lines of work for the Association and give rise to the presentation of a Multinational Candidacy of Intangible Cultural Heritage to UNESCO.

These were the themes dealt with in these interscholastic conferences throughout the 20 first years of the association’s history: