The Cultural and Pedagogical Association PONTE…NAS ONDAS! has always had as one of its main objectives the diffusion of School Radio because it considers it a simple, inexpensive tool that is easily installed in educational centers, at the same time that it is a strong teaching tool with many applications and infinite possibilities in schools’ daily lives. The arrival of modern media of communication, the Internet, social networks, as well as the appearance of technological advances, digital sound recorders and players, mobile phones, computers, tablets, have not taken anything away from the potential of radio as a medium but instead have even added more possibilities to it and made its use easier, one could say.

With radio as a central tool, PONTE…NAS ONDAS! carries out workshops for starting a school radio throughout educational centers in Galicia and Northern Portugal, providing skills to around a thousand boys and girls in the creation and the implementation of podcasts for their insertion into a digital spreading platform that can be school radios from each center where they are developed. PONTE…NAS ONDAS! is also continuing with its specific program of formation for teachers on the creation of podcasts and by putting into place digital radios. Also, the association is offering help to educational centers in the process of creating school broadcast stations.

PONTE…NAS ONDAS! has experienced a very large evolution since its beginnings 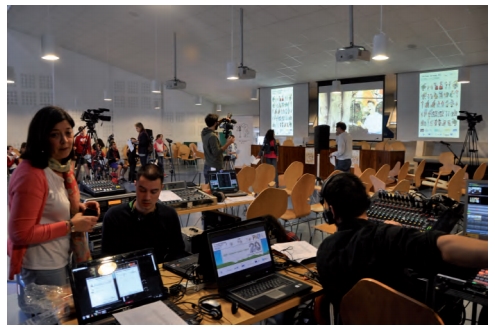 In 1997, the first internet webcast was made. Galician small company ENSINET, of Marín, owned by the engineer and professor José María López Gómez moved to Salvaterra de Miño a Windows NT server with an ISDN connection, through which the entire content was broadcast to the network by streaming. In 1998, a new internet transmission was made, with the collaboration of Telefónica and expanding bandwidth.

In the 8th edition, in 2002, communication via videoconference was established between the school radio studio in Salvaterra de Miño’s Casa de Cultura, the Arco Iris School in Maputo (Mozambique) and the largest public school in Rio de Janeiro, Pedro II School. But also, a live broadcast was carried out from seven radio studios: six professional studios (from municipal broadcast stations) and the school radio established in the Casa da Cultura in Salvaterra de Miño.

In these last years, new technologies have been incorporated little by little and today the Internet is the medium that makes it possible for this experience to reach places which were unthinkable to access years ago.

The broadcast of television signal by Internet carried out by UVIGO-TV (the University of Vigo’s TV station) made the experience take a leap towards a multimedia focus where audiovisual communication has taken main stage. This has permitted there to be a greater following and participation in educational centers to attend live broadcasts of events through the Web, which can be thought of as an audivovisual program. Also, it has deepened interactivity: during the day of the broadcasts, they can receive messages from everyone who is following the broadcast on the Internet. Email, fora and chats were initially tools used to exchange messages about the broadcast programs. During International Radio Day in 2017, the use of WhatsApp was incorporated, with the arrival of text and voice messages in real time from mobile phones, which were incorporated into the event.

Important media of Portugal and Spain have collaborated with the experience

Communication media such as radio, television and written press have been collaborating with the experience by spreading information about this conference. Another great step forward was the incorporation of students from the University which made it possible for this broadcast to get to the point where it could last 24 hours. And thus was completed the educational cycle of PONTE…NAS ONDAS!, embracing the participation of an educational experience of students from the 3-year-old level to the university level.