The basic function of PONTE…NAS ONDAS! has been evolving every year, even though the basic preparation format on the part of the teachers, has remained focused on the essential things.

The principal axis during the first twenty years was the multimedia conference that brought together all the schools every spring, before the end of the school year. A conference that sifted through months of didactic work and its implications for classrooms. 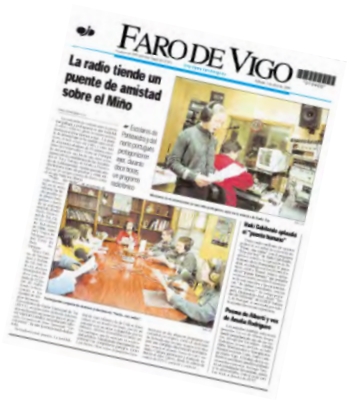 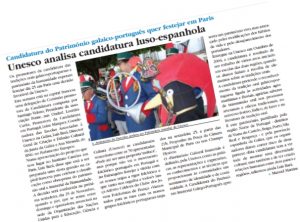 Everything began with the beginning of the school year: in the first years, the teachers would gather to decide a theme that would be proposed to the participants, as well as the first steps to take. Afterwards came the work in schools: the call to action in the schools, the programming of activities related to the theme, the participation in the school’s radio program and the elaboration of an audiovisual program. On the day of the broadcast, the programming track is prepared in a very precise way, in which each program has its respective broadcast time, time, hours for live connection, etc., assigned. Conferences with programming in 7 radio studios situated on both sides of the Galician-Portuguese border have been carried out and the radio has played also in many occasions outside of the studio, traveling to auditoriums, museums and social and cultural locations and in five radios belonging to Rede EMUGA (Emisoras Municipais Galegos) situated throughout Galicia.

Throughout the years, the activity of PONTE…NAS ONDAS! has been unfolding in other activities farther than that central conference. For example, during the 2006-2007 school year, the first edition of the “Oral Tradition Gathering Contest” was celebrated. This first call was one of the direct consequences of the candidacy process of the Galician Portuguese Intangible Cultural Heritage to UNESCO, and it also remained a part of the program of which was the First Oral Tradition and Literature Week, which was developed in November 2006. The objective of the contest was the collaboration of educational centers in Galicia and Portugal in the preservation of Galician-Portuguese Intangible Cultural Heritage, as well as the spreading, promotion and transmission of living expressions of the Galician-Portuguese tradition. So then, the final purpose: to search for the approaching of the students to cultural manifestations present in their own environment.

In the following years, and as fruit of the work of students and teachers via these contests, a Virtual Archive of Galician-Portuguese Intangible Cultural Heritage was created, for free consulting on the Web, which brings together hundreds of hours of audio, video, images and texts about diverse expressions or oral tradition forms in prose (myths, legends, short stories, oral tales, tongue-twisters, riddles, etc.) as well as in verse (romances, histories, blind tales, coplas, prayers, recitations, refrains, etc.)

“Living Masterpieces”, “Get Ready…To Tell” and “Living Libraries” were the slogans for some of the years.

The archive brings together information of topics such as traditional games, the personal experiences of historical events, traditional occupations, immigration, repression and dictatorships, contraband on the border, etc., with an important sample of works that welcome representative samples of common Galician-Portuguese Intangible Cultural Heritage.

In 2002, PONTE…NAS ONDAS! sent out a call for the first Exhibition of Galician-Portuguese Oral Tradition. In that year musicians from Galician and Northern Portugal came together fundamentally. Since then, this event has been oral narrators, people bringing traditional expressions, and artists who have Galician-Portuguese oral tradition as their source of inspiration. Vigo, Paredes de Coura, Pontevedra, Melgaço, O Porriño, A Guarda and Monção were some of the municipalities that welcomed the Exhibition. People related to oral and musical tradition, from Portugal, Brazil, Angola, Mozambique and Galicia also participated, such as Amélia Muge, Vozes da Radio, Cantares do Minho, Augusto Canário, Socorro Lira, Alberto Mbundi, Timbila Muzimba, Xistra, Uxía, Mini and Mero, Mercedes Peón, Couple Coffee, etc.

The Oral Tradition Exhibition is an event that brings together the voices of Galician-Portuguese Intangible Cultural Heritage, conceived to transmit to the younger generations contemporary expressions of this common culture. In it come together people bringing manifestations of a traditional culture with artists who base their creative work on oral tradition.

In 2011, UNESCO proclaimed 13 February as “International Radio Day” commemorating the day in which the United Nations created the “United Nations Radio” in the year 1946. Since then, the commemoration of this event has been gaining importance also in the association’s annual calendar of activities. As an example of this, in the 2017 edition, this event was celebrated with a special opening of the digital portal Escolas nas Ondas (www.escolasnasondas.com), carrying out eight hours of live broadcast from IES Terra de Turonio in Gondomar, and spreading the passionate experience of live collaboration between the students of Barbudo Primary School in Vila Verde (Portugal) and that of Cordo Boullosa in Ponte Caldelas (Galicia), united by the airwaves to discover and tell how much we have in common on both banks of the Miño River.

Oral narration workshops in schools, radio workshops and school meetings for traditional Galician-Portuguese games are some other events that are examples of the fertile activity that PONTE…NAS ONDAS! develops.