In 2004, the Cultural and Pedagogical Association PONTE…NAS ONDAS! received a special acknowledgement from the European Bureau for Lesser Used Languages (EBLUL), which approved a resolution in support of the work of the association.

In 2005 2005 the Xunta of Galicia granted PONTE…NAS ONDAS! the Galicia Communication Prize of “Best initiative in the field of communication”.

In 2005 the Association of Galician Language Writers (AELG) recognized the work of PONTE…NAS ONDAS! with the “Good and Generous” Prize, bound for organizations and entities that develop important cultural work.

In 2013, the Spanish Ministry of Culture, Education and Sport granted PONTE…NAS ONDAS! the “Seal of Good Ibero-American Practice” keeping in mind, among other aspects, “the quality of the experience in originality and creativity, upon exploring innovative focuses adequate for the context in which it is developed, transferable to other media and other countries in the Ibero-American community.”

Honorary Judge of the Couto Mixto

That same year, 2013, PONTE…NAS ONDAS! was recognized as an Honorary Judge of the Couto Mixto (a territorial enclave on the Galician-Portuguese border which enjoyed independence in the past). 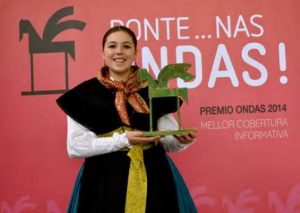 In 2014, the Association received the ONDAS Prize (the most prestigious communication prize in Spain) for the “best informative coverage of Galician-Portuguese intangible cultural heritage.”

In 2016, UNESCO accredited PONTE…NAS ONDAS! as a consultant NGO for intangible cultural heritage.

In 2017, the Lois Peña Foundation awarded the work that PONTE…NAS ONDAS! does in the implication of various lines of work but especially that of young people using the language and defending a way of living and their own culture.